“If there’s one thing I regret in my long career as a travel journalist,” Mike Prowse says in the ninth episode if The Mike Prowse Solo Travel Podcast,  “it’s the travel.” 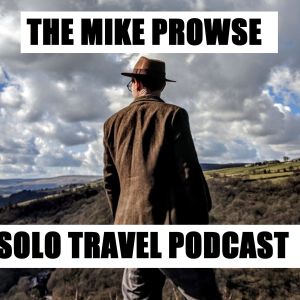 Solo Travel Expert. Three-time travel writer of the year in the weeklies and paid for section of the South West category of the Regional Press Awards 2004, 2007, 2011.

When I read the description of The Mike Prowse Solo Travel Podcast, I was expecting a standard travel podcast with a comedic host. What I was not expecting was rapidfire jokes, lampooning the travel industry and much of the tropes within travel blogging. I did not expect, for instance, the ninth episode on ethical tourism to discuss how the other travelers were some hippies, some lumberjacks, and “fourteen travel podcasters.” I also certainly didn’t expect the episode to end with a drug-addled squirrel committing an act of, essentially, eco-terrorism.

It’s this absurdity that makes The Mike Prowse Solo Travel Podcast such a wild ride from start to finish, especially given each episode clocks in at just about ten minutes. Because of its run time, each episode feels like a little bite of silly joy. It would be easy to marathon through, but you’re likely to find yourself rewinding to make sure you caught a joke: Mike Prowse’s voice is calming enough to sometimes encourage tuning out, but you’ll be hooked back in just as quickly when you hear the understated delivery of a punchline.

The Mike Prowse Solo Travel Podcast is less Far from Home or Unmapped, more ARDEN or perhaps even The Amelia Project. It’s a hilarious satire with full sound design and strange plots in each episode. The sound design is as transportational as one would hope from a travel podcast, placing the listener directly in the space that the narration is trying to convey. It’s unobtrusive, but helps give each episode a nice texture that amplifies the feeling of each location being discussed.

The Mike Prowse Solo Travel Podcast is unclear about its blend of fact and fiction in its presentation, but while this did confuse me, I was laughing too hard to care much about how much of the travel or information is real. The podcast acts like a standard comedy audio fiction, delivering strangely subversive, goofy jokes at breakneck speed. Everything in the podcast works to defy your expectations, like the line, “Oh, give me a home where the buffalo roam. Can you guess where I am? That’s right: Rome,” which made me laugh so hard I had to pause listening to compose myself.