For the last two years or so, there’s been this kind of terrible, kind of wonderful trend on YouTube. There are tons of videos that follow a basic formula: “[Piece of media] except [some anxiety-inducing change in editing].” The most popular of these are probably “bee movie but every time they say bee it speeds up” or “All Star but it’s a Bach chorale following the conventions of the Common Practice Period.” Some of my favorites, though, are the very underrated and dichotomous “mii channel but all the pauses are uncomfortably long” and “the mii channel music except it doesn’t have any pauses”:

For reference, here‘s how the song is supposed to sound.

I think the reason I love these videos specifically is because, unfortunately, they seem so relatable. After listening to so many podcasts, this is often exactly how so many of them have started to sound to me. It’s hyperbolic, of course . . . but not as hyperbolic as I’d like. In an audio-only medium, silence is one of the most underappreciated facets of editing. The main problems I see with how silence is used in podcasts is trying for dialogue that’s too clean in audio dramas, not giving weighty dialogue enough space, and making sure your silences aren’t giving your editing away due to a lack of ambient noise.

The Love of Silence: Inauthentic Frustration

I’ve discussed writing authentic dialogue at length before; in fact, the topic was the first post that I ever wrote for Podcast Problems (current Wil apologizes for past Wil’s copious gif usage). While writing is obviously one of the most important factors in delivering authentic dialogue, editing shouldn’t be underplayed; because most podcast audio is recorded asynchronously, editing is the most important tool in making sure their podcast’s dialogue sounds genuine.

In podcasting, there seems to be an idea that clean audio is the key to making a podcast sound professional. You want the dialogue to be able to be heard, first and foremost, if you’re taking the time to write authentically. The problem is that people don’t speak for clean audio. People talk over each other, especially if they’re arguing. So often, I’ll hear two characters in an audio drama engaged in some debate or argument, but they pause for a second when the other person is done talking before they start. I cannot fathom this happening in an actual argument, and hearing it immediately breaks immersion.

The same goes for a character who’s being cut off. Say, for instance, I’m telling my friend a joke. My friend has heard this joke a thousand times, because I am unoriginal and have told it to them a thousand times. My friend, understandably, cuts me off; they are fed up with these antics. I, however, do not know preemptively that my friend is going to cut off my punchline, because I am not a psychic nor, apparently, a very attentive friend. Why, then, would our dialogue be edited exactly as written on the page?:

The editing here should reflect how real conversation in this scene would work:

Editing your dialogue to sound genuine, and therefore more immersive, comes at the expense of clean audio. The two are not necessarily mutually exclusive–you don’t need every line of dialogue to bleed into the next and over each other–but there needs to be compromise between the two if you want dialogue that sounds real.

It should be mentioned that this might come at the expense of some accessibility, which isn’t something that should be ignored. Excessive use of over-talk can make dialogue more difficult for people who are hard of hearing or have audio processing issues; however, this is just another reason why having your transcripts available is so important.

The Fear of Silence: Unemotional Back-and-Forth

Ever since the emergence and popularization of YouTube, digital media has had a fear of silence. We’ve talked about the “grammar” of YouTube before, and the more it creeps into podcasting–audio dramas in particular, but nonfiction as well–the more I find writing that should be emotional but winds up falling flat.

Pauses are important. Letting moments hang between heavy dialogue shows that your characters are processing information, that they’re hesitating before saying something important, or that they’re trying to plan out a response. Let’s take, for instance, a situation in which I’m trying to tell my friend a joke, but this is the final straw for them, because I’ve told this joke too many times:

This one-to-one back and forth is sufficient. It delivers a point. I try to tell a joke, my friend is frustrated, and I respond. It’s a very simple dialogue with a shallow emotional reaction, because each character is reacting a beat after the other responds. Neither character needs to process anything with this editing; they just respond. Contrast this with audio edited to be given some space: 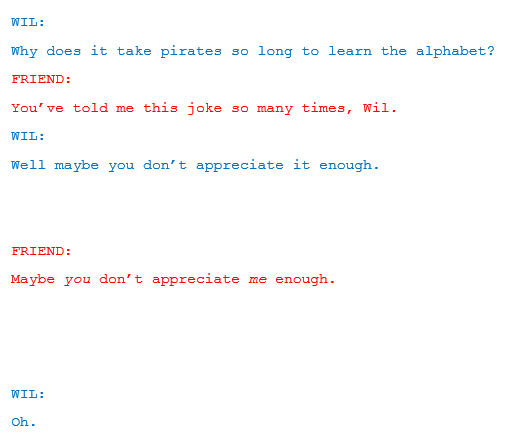 Here, we can see hesitation. There’s an initial back-and-forth between the characters, because the exchange is a bit snappy at the start (and, really, the third line of dialogue could even be edited more like the discussion up above, with my line blended over my friend’s line). The difference is when my friend takes a moment to think through their frustrations to say what they really mean: this isn’t just about the joke, but the quality of my friendship. Instead of this line being a simple response, the pause shows just how much my joke has hurt them. Here, the joke isn’t the problem–it’s what the joke stands for.

Similarly, my realization at the end isn’t just a simple acknowledgement that my friend is frustrated with me. My last line here is the understanding of all of my misdeeds as a friend or, at least, my understanding that I have done something truly harmful. The pause has rendered a simple “Oh,” into something much more.

The depth of the scene here depends on taking moments between heavy lines in the dialogue to show that the characters are processing. Editors need to acclimate themselves to silence, to understand that audiences will have the patience for it. I’d love to hear more podcasts where silences are used strategically to allow audiences feel the weight of a moment. I’d love to hear more editors allow the audience to understand that two characters are looking at each other, or pointedly not looking at each other; listeners are capable of hearing silence but still visualizing action. Like blending the lines between dialogue that’s quick-paced and organic, utilizing silence to maximize emotional intensity is key to having authentic dialogue that can still move the audience.

Too Silent Silence: Cutting Off Your Ambient Noise

This means that when you cut a piece of dialogue, you’re also cutting the ambient noise, leaving the audience in a lurch from ambient noise to dead silence. There is a very good chance that most audiences won’t notice this, but to those who do, it’s an easy way to see your fingerprints all over the editing and bring us right out of the scene. This silent that is far too silent reminds the audience that this is, in fact, an audio production instead of feeling like an actual event. It also shows that you likely took pieces of the dialogue from several takes. Instead of everything sounding like it’s one scene, you can hear the space between the recording and the silence, the distance between the takes:

Instead of just cutting off the audio right at the end of the dialogue to silence, try using some of the ambient noise from the spaces between takes and using that to fill the silence. Getting into this practice is going to make the silences between lines of dialogue feel so much softer and more natural. Making sure everything sounds like it’s happening in the same place is going to add to a deeper immersion for the listener–the amount of immersion the writing and acting deserve.

7 thoughts on “Podcast Problems: The Love and Fear of Silence”