RadioPublic, the podcatcher made by PRX, is a quest, and I am its hero.

A RadioPublic embed of the episode for thematic coherence. You can also find the episode here.

But then, something else happened. Something . . . important.

A push notification appeared at the top of my phone. Being the millennial with ADD that I am, I only saw very little of the message, “unlocked bonus audio,” before hitting the alert and opening up the spoil of riches that I deserve. I can’t be positive, but looking back, I’m fairly sure this was the push notification message in full:

This is RadioPublic. I’m Roman Mars. And you’re the fucking chosen one, Wil. As thanks for you being the hero of podcast listeners, here’s some secret audio that nobody else in the world knows about.

Before any of you begin to comment that you, too, have unlocked bonus audio on RadioPublic, or that you have found the Radiotopia Audio Extras through other means, you are a liar and a fool and I will sue you for defamation.

To properly explain my rise to Hero, though, we must lay the framework that finally lead me here, to my greatest success. In the interest of not writing out the full Hero’s Journey, because I do not want to, we will be examining my heroic narrative through the lens of Dan Harmon’s Story Circle, because it only contains eight steps instead of ten. 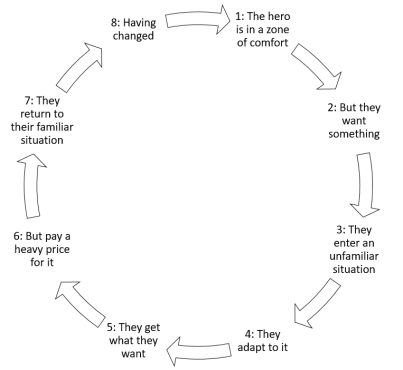 The Story Circle plot structure consists of the following steps:

1. The hero is in a zone of comfort

What is my zone of comfort, you might ask? Well, reader, before I used RadioPublic as my podcatcher, I used PocketCasts (and still do a little but don’t worry that’s not important to the narrative so let’s just not focus on it). I was comfortable with PocketCasts–liked it even–until it changed its whole shit. The redesign on PocketCasts completely removed functionality that I needed to continue writing pieces like This Week in Podcasts, and also it was ugly and I hated it.

2. But they want something

Was I going to abandon PocketCasts for something . . . better? Or was I going to stay in my comfort zone and accept living with an app that would never give me what I needed?

Reader, you know what the fuck I did.

3. They enter an unfamiliar situation

I don’t remember who first recommended RadioPublic to me as a podcatcher, and it doesn’t matter, because they aren’t the protagonist of this story, I am (but it was probably Elena Fernández Collins). When I downloaded RadioPublic, I was scared. I was hesitant. I didn’t want to like it, and everything was in weird places compared to PocketCasts.

But I adapted to it.

5. They get what they want

After adapting, I found that RadioPublic was actually really lovely to use. Not only was its UI welcoming and intuitive, it also had lovely curated playlists from people I trust, gives back to podcasters with a teeny tiny bit of money just from my listens, and even highlighted fiction.

I finally had a podcatcher that met my needs–well, most of my needs.

6. But pay a heavy price for it

The problem? RadioPublic doesn’t have a lot of podcast feeds. Remember that time Luminary got into a lot of trouble from a bunch of networks because it was distributing their feeds without their knowledge (like plenty of other podcatchers, but the difference here being that Luminary is in direct competition with some of those networks–like Gimlet, which is owned by distribution platform Spotify)? RadioPublic doesn’t do that, which is good, but that means I don’t have those feeds in RadioPublic, which is bad.

7. They return to their familiar situation

Reader, I knew what I had to do. I had to go back to PocketCasts. How else was I going to get those sick feeds of weird indies that RadioPublic didn’t have?

But as soon as I returned, I knew that things were . . . different now. I knew that PocketCasts was comfortable, but it wasn’t very good anymore. RadioPublic was beautiful, but it also had its shortcomings. But I was loyal. I didn’t abandon RadioPublic, even with the trials I had faced. Granted, I might still use PocketCasts on the side but listen that isn’t the point of the story and I don’t know why we’re letting monogamy culture get into our app usage and let’s just focus on how I returned to my familiar situation having changed okay?

I am the hero, and I have succeeded in my quest

So thank you, RadioPublic, for rewarding my efforts.

And to the rest of you, you are welcome. I don’t really know yet how this benefits you, but it doesn’t matter, because you are not the protagonist of this story. I am.

2 thoughts on “RadioPublic Is a Quest, And I Am the Champion”